Karyatis Luxury Maisonette is located in a picturesque neighbourhood of Athens, Koukaki, at its most upscale district close to southern foothills of the Acropolis and next to Philopappou Hill.

It is the ideal choice for a stay experience that combines the enchantment of Athens’ ancient heritage with luxurious, modern day conveniences. Within a two minute walk, the wide, cobblestone, pedestrian Dionysiou Areopagitou street awaits to take you all the way around the Acropolis’ perimeter. Other landmarks at the foot of the Acropolis that are a stone’s throw from Karyatis Luxury Maisonette are the Ancient Theatre of Dionysus, the Acropolis Museum directly opposite, Hadrian’s Arch and the Temple of Olympian Zeus found at the far right end of the pedestrian street, across Syggrou Avenue as well as the Herodion Atticus Odeon, which is found at the base of the rock. Visible from Karyatis Luxury Maisonette, Herodion Atticus Odeon is not just an ancient landmark; it is a fully functional theatre, hosting many cultural shows including concerts and drama performances, which guests can listen to from the comfort of the upper level loft terraces, whilst soaking in the mesmerising sight of the illuminated Acropolis by night.

Staying at Karyatis Luxury Maisonette, you will experience minimal disturbance from traffic since you can easily walk to all the great Athenian landmarks and historical districts. Koukaki has traditionally been a quiet, residential neighbourhood, but has evolved through time, attaining a hip and casual aura about it. It is now brimming with an intriguing array of low key bars, cafes and restaurants, frequented by Athens’ youth primarily. Occasionally, you will come across a classic kafeneion serving traditional coffees, habituated by typical Greek personas enjoying their day by day routine as if detached from the rest of the world. It is a neighbourhood of visual contrast which is at the heart of its charm. Diverse architectural styles showcase the social and cultural progression of the past decades, while you will discover little souvenir shops, modern eateries, dive bars, colourful cafes, street food stores, quality restaurants and quaint bistros. Koukaki is a perfect blend of old meets new and a paragon of how ancient charm is fused with modern lifestyle. Karyatis Luxury Maisonette is near the Acropolis Metro and relatively close to the Thissio Rail and Monastiraki Metro Rail stations, so guests have the freedom to explore the inner city without requiring a car.

A casual stroll towards the left around the southern facade of the Acropolis will reveal the historic areas of Thissio, Monastiraki, Plaka and Psyrri that are all within walking distance from Karyatis Luxury Maisonette. Sauntering around, visitors can observe the most bustling side of Athens city that has been built around the ancient rock. Numerous tavernas, cafes, shops and bars to catch your eye are situated all around the perimeter, offering views onto the ancient relics that are dispersed all around. Other highlights of the surrounding area of Philopappou Hill are the National Observatory and the Pnyx site, the tomb of Socrates, as well as the Ancient Agora, found between Thissio and Monastiraki, the Athenian Necropolis and the archaeological Keramikos site. These can be all reached by foot, within 20 or so minutes from Karyatis Luxury Maisonette. There are many contemporary cultural attractions to discover too such as the notable branches of the Benaki Museum, showcasing Cycladic and Byzantine art among other exhibitions, even some traditional hammam baths in Thissio and Psyrri for a session of deep relaxation if needed. Other attractions within this walk around include Monastiraki Square and its flea market, Ermou and its countless high street shopping outlets, the islandesque Anafiotika district of Plaka and the weathered, urban feel of Psyrri and its numerous al fresco bars complete the enchanting tapestry of Athenian life. 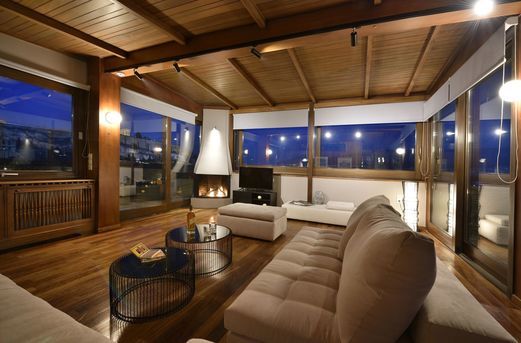 The Apartment
Karyatis Luxury Maisonette is an elegant, fully renovated, 1970’s apartment, boasting the most...
read moreBook This 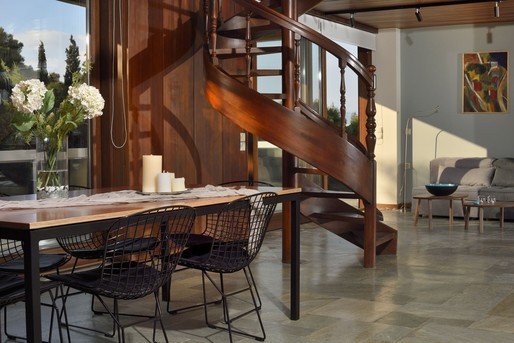 Photo Gallery
Browse through the photo gallery of Karyatis Luxury Maisonette, and get a taste of what you will be...
read more